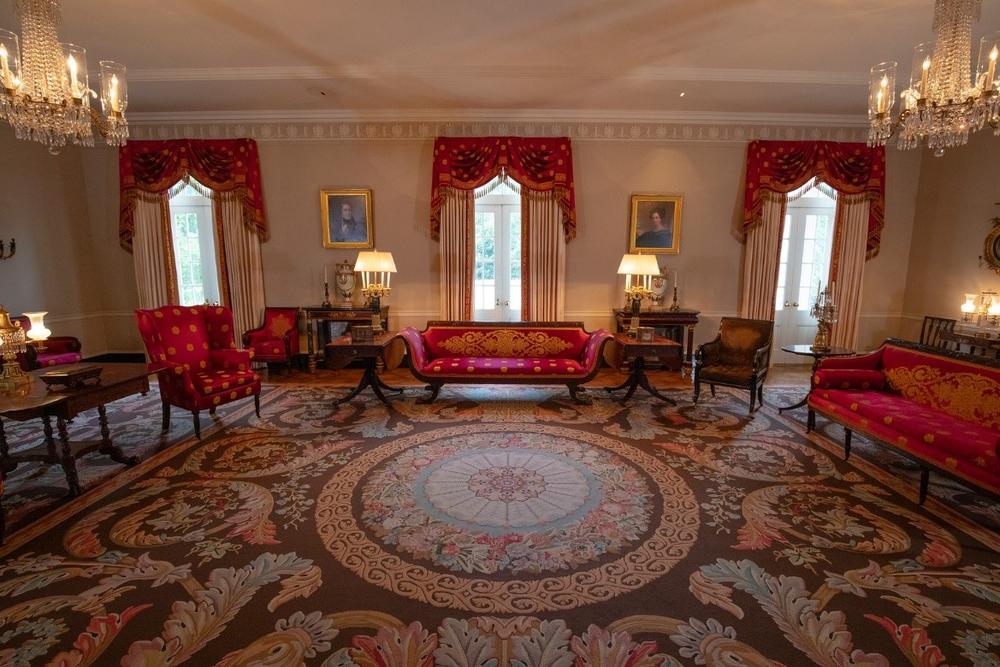 The State Drawing Room is primarily used for greeting official visitors and is often the backdrop for photographs with the Governor and First Lady.

The design of the room is modeled after the red room in the White House. The window treatment and upholstery are Scalamandre silk. Scalamandre is one of America’s most prestigious manufacturers of traditional textiles. They are famous for their work at the White House. In the early 1960s, First Lady Jacqueline Kennedy commissioned the company to help restore the White House’s furniture. Over the years, subsequent refurbishments at the White House have continued to use Scalamandre fabrics. Likewise, many of the Governor’s Mansion’s furnishings were recovered and remade over time. 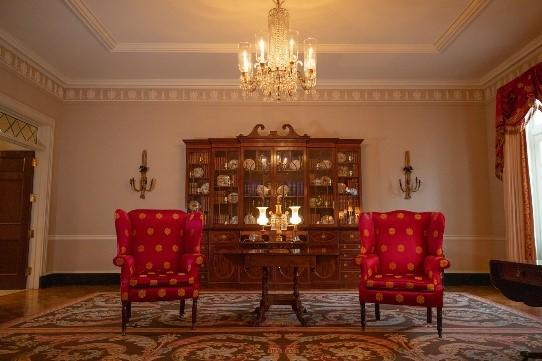 On the wall to the left upon entry, there is a pair of 1818 English gold gilt wall sconces that have been prepared with gesso, a white plaster and glue made in Paris used for preparing surfaces for gilding. The sconces also include wood with ebonized Egyptian heads. Between the sconces is a majestic mahogany breakfront from England made in 1780. Breakfronts characteristically have center sections which extend farther past the sections on either side. The dessert service inside the breakfront is Crown Derby china manufactured in Derby, England circa 1795. The teacups are part of the USS Georgia collection. 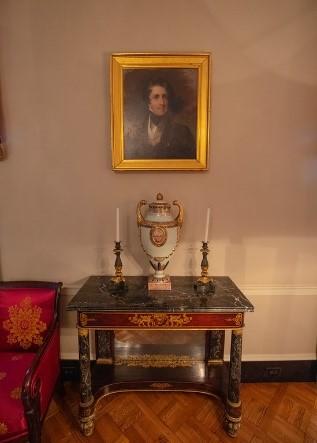 Along the far wall, there are two mahogany marble-top pier tables from 1815. Atop both tables are pairs of Chinese pistol-handled vases made sometime between 1780 and 1800. The portraits located above each table are by the painter John Neagle. He is most known for his portrait painting during the first half of the 19th century. The portraits on the wall are of Naval Lieutenant and Mrs. John Marston. He served in the Navy during the Revolutionary War and was promoted to rear admiral before retiring.

On the right side of the room are two American console tables, built in 1815, which are attributed to Charles Lannuier, a French-born cabinet maker who migrated to America in 1803. Atop the tables are gilt bronze Argand lamps, a type of oil lamp invented in 1780 by Aime Argand in France. The two lamps from this room were crafted in 1820. Above the console tables, there are a pair of bull’s eye girandoles with convex mirrors from 1815.

The punch bowl, made circa 1785, is located by the sofa on the far side of the room and depicts trading pavilions called Hongs located in Canton, China. The term, Hongs, was used to describe major business and trading facilities before the establishment of the City of Hong Kong. 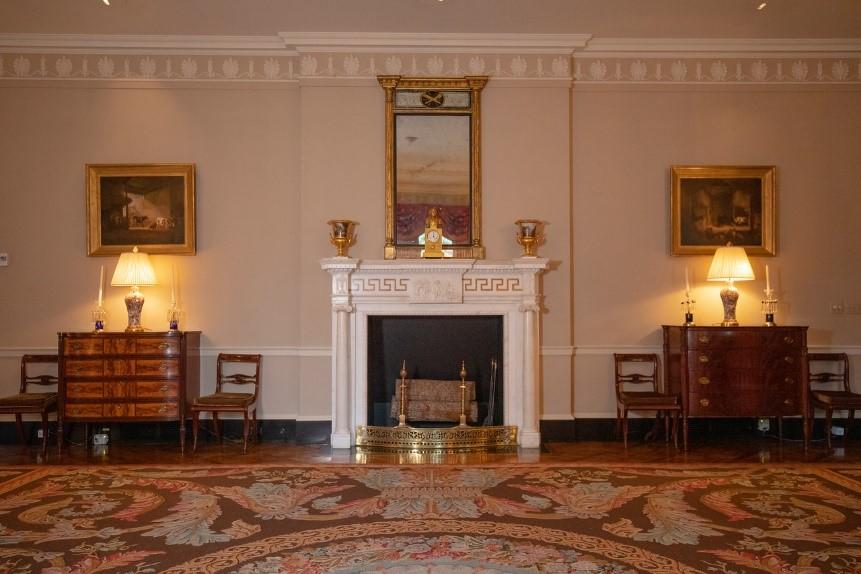 The fireplace mantle is Italian marble. The mantle was carved in England in 1790. Atop the mantle, there are two French campana or bell-shaped, porcelain vases, which are hand-painted with landscape scenes, which were made sometime between 1800 and 1810. In the middle of the mantle is a clock of George Washington crafted in France in 1816. The inscription on the clock reads, “1st in War, 1st in Peace, 1st in the Heart of his countrymen.” Hanging on the wall above, there is an American-made gilt Federal pier mirror with an eglomise panel. Eglomise is a term referring to a style of reverse glass gilding and painting that was used circa 1800.

To either side of the fireplace, there are two Federal bow front mahogany chests, which were built between 1810 and 1820. Atop each, there are Chinese mandarin vases, created sometime between the 1760s and the 1780s. Both have been converted into lamps. On either side of the lamps, there are two pairs of crystal candlestick holders from England made during the early 19th century. The two paintings above the chests were painted in 1830 by Alvan Fisher, one of America’s pioneers in landscape painting.

The sofas are attributed to Duncan Phyfe and were built in 1815. Phyfe was one of America’s leading furniture makers during the Federal period. On either side of the center sofa, there is a pair of Italian gilt bronze caryatid candelabras lamps that were made circa 1795. The word caryatid originates from Greece and means a female statue serving as an architectural support.

The State Drawing Room’s rug is a replica of an original Aubusson tapestry. The City of Aubusson, located in central France, is famous throughout the world for its productions of tapestries and carpets since the 14th century. The replicated rug was crafted by Lacey Champion Mill of Fairmount, Georgia. It was donated to the Governor’s Mansion before the 1996 Olympics competed in Atlanta. This was to showcase Georgia’s textile industry.

The two chandeliers are English Regency and were made around 1815.

Click the button below to continue your tour. The next stop is the State Dining Room.