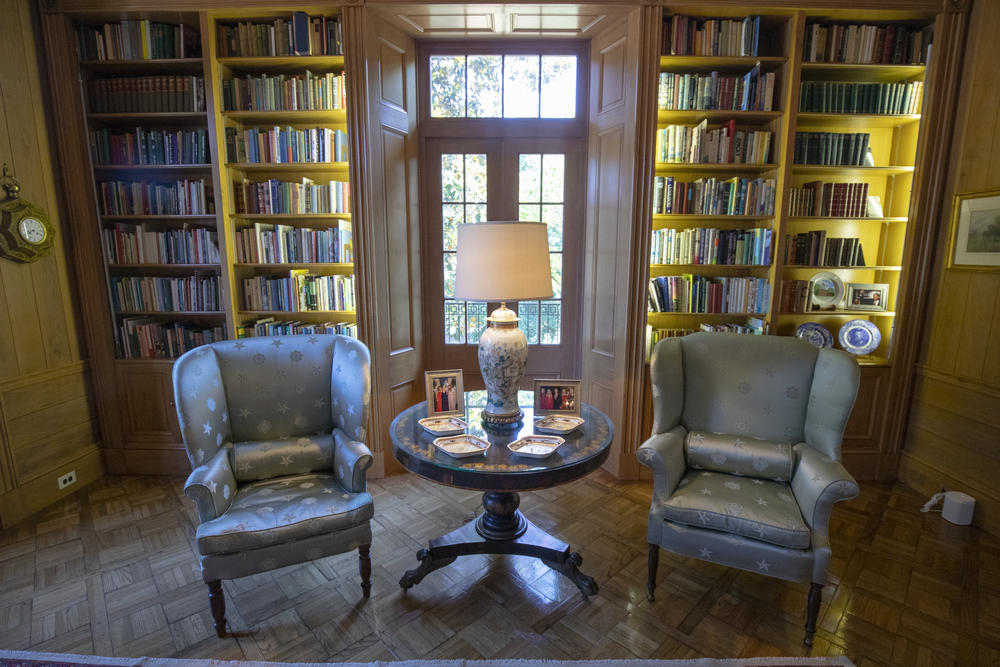 Continuing through the Cross Hall, we enter the Family Sitting Room, or the “Georgia Room.”

One of the unique aspects to this room is the paneling. The panels were made from the butternut tree, a native species in Georgia. In the pioneer days, chips of the butternut tree were used to brew beer, and the oil from the tree’s nuts were commonly found in recipes and ointments. The butternut tree also served as a means for dying clothing. 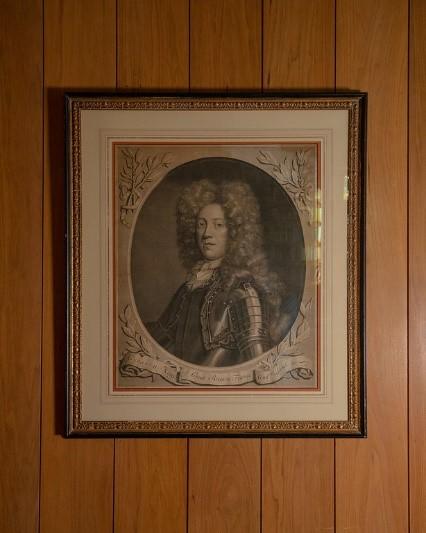 On the wall left of the entrance, there is a detailed portrait of King George II of England, after whom Georgia was named. 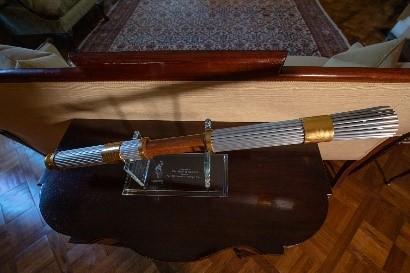 On the table is a torch used during the 1996 Olympics held in Atlanta. 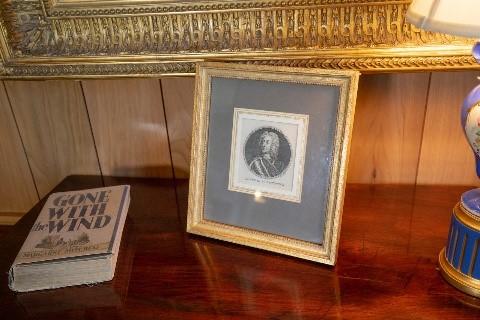 Above the Pembroke table located on the left, there is the painting, “Autumn Landscape.” It was painted between the 1850s and 1880s by C.H. Chapin, an American 19th century painter. Atop the table is a first edition of “Gone with the Wind.” This book is signed by the author, Margaret Mitchell. Next to the book is a portrait of Georgia’s founder, James Edward Oglethorpe.

Continuing to the right, there are built-in bookcases. The book collection located in the family sitting room are works of fiction and non-fiction literature organized by the Dewey Decimal System. The books are either by Georgia authors or topics about the State of Georgia. Sitting on the bookshelves to the right, there are two blue and white Wedgewood plates, one portrays James Edward Oglethorpe. The other features the Medical College of Georgia, which is now called Augusta University. This is the oldest school of medicine in Georgia, being chartered in 1828. On the shelf above these, there is a white plate, picturing the Jerusalem Lutheran Church. It was built by the Salzburgers in New Ebenezer, Georgia, located 25 miles northwest of Savannah. The church was erected between 1767 and 1769 and is still a lively center for church gatherings today.

In front of the bookshelves is a round rosewood table, crafted by John Needles in 1825. Needles was a Quaker and was very active in the anti-slavery movement throughout the Antebellum Period. Atop the rosewood table are four French diamond-shaped sweetmeat dishes from 1800. Behind the dishes, there are pictures of the First Family, capturing the smiles of Governor Kemp, the First Lady, and their three daughters.

Just right of the bookshelves, there is a painting titled “Marsh Landscape.” The landscape was painted in 1917 by Alexander J. Drysdale, who was born in Marietta.

The fireplace has a mantle made of Italian white marble and dates back to 1780. Above is an Empire giltwood-style mirror made in either England or the United States made around 1800. Atop the mantle is a French Empire-period bronze Dore clock. The clock’s structure depicts a young boy seated on a bench with his feet resting on a footstool. The clock was made in Paris circa 1813 to 1825.

Hanging on the wall to the right of the fireplace is a pair of eglomise, technique of back painting glass, paintings. They are of the trading pavilions called Hongs and located in Canton, China (circa 1840). The Hongs were major business and trading facilities geared toward the western world. The term Hong was used before the City of Hong Kong was established. When a foreign country was in port doing business, their flag would be raised. 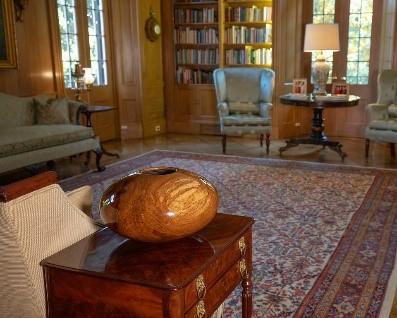 Central to the room, the mahogany square back Federal sofa was made by Slover and Taylor in 1800. To its side is the mahogany working table with the original sewing basket underneath made in 1790. Atop the table is a wooden bowl, which was crafted and donated by Matt Maulthrop of Marietta. The bowl was created from a tree that fell on the Governor’s Mansion property.

Spanning the floor is a Persian rug from the first half of the 20th century and made of hand-knotted wool.

Click the link below to continue to the Family Dining Room.